The story of Magic Cloud:
2020
https://magiccloud.fi/wp-content/uploads/2020/07/tiedostojen-jakaminen.jpg

Magic Cloud has more than 300 customers and 19 experts. With the new strategy Magic Cloud creates even more comprehensive services where partnership for the development of customers’ cloud environment is in the centre.

Our team is bigger than ever: during the year 2017 we got seven new, competent and skillful workmates

Magic Cloud moves to the center of Tampere with the financial companies of Haapavuori’s parents. Together the companies form a unique ICT and financial expertise center

Magic SafeMail enables the cooperation with several municipalities and cities

Organization and the services are developed futher. Magic ShareFile is added to the service selection

At the age of 13, Timo Haapavuori sets up a trade name called Micro Magic

On the 9th of May in 1996, the 13-year-old Timo Haapavuori received a mail from the Trade Register: his trade name Micro Magic had been registered in the Trade Register and there no longer were any obstacles in the way of an own company. However, the way to entrepreneurship started earlier but it was not completely obvious that a 13-year-old boy could be an entrepreneur. As Timo succeeded to assure his parents of his business idea the business could officially start.
The beginning of the business was very different from the business Magic Cloud runs today. Timo had saved up a small amount of money, some 2000 marks he recalls, that he used to buy all kinds of computer equipment for his company. So the parents’ living room turned into a computer store that sold different products, such as diskettes, that were popular at the time. Micro Magic was open every day after school, and while many potential customers were delighted by the young entrepreneur, there were also many who doubted that a 13-year-old could run his own business. In spite of that Timo remembers the turnover of 1996 to be around 90 000 marks. Although the amount may seem large, Timo sold his first computers that cost around 10 000 marks each during his first year as an entrepreneur.

– It felt really amazing to sell an actual computer to an actual company. All the customers had a really positive and open-minded attitude to my business and they trusted my skills in the beginning. Without these people Magic Cloud’s story would never have begun, Timo recalls. 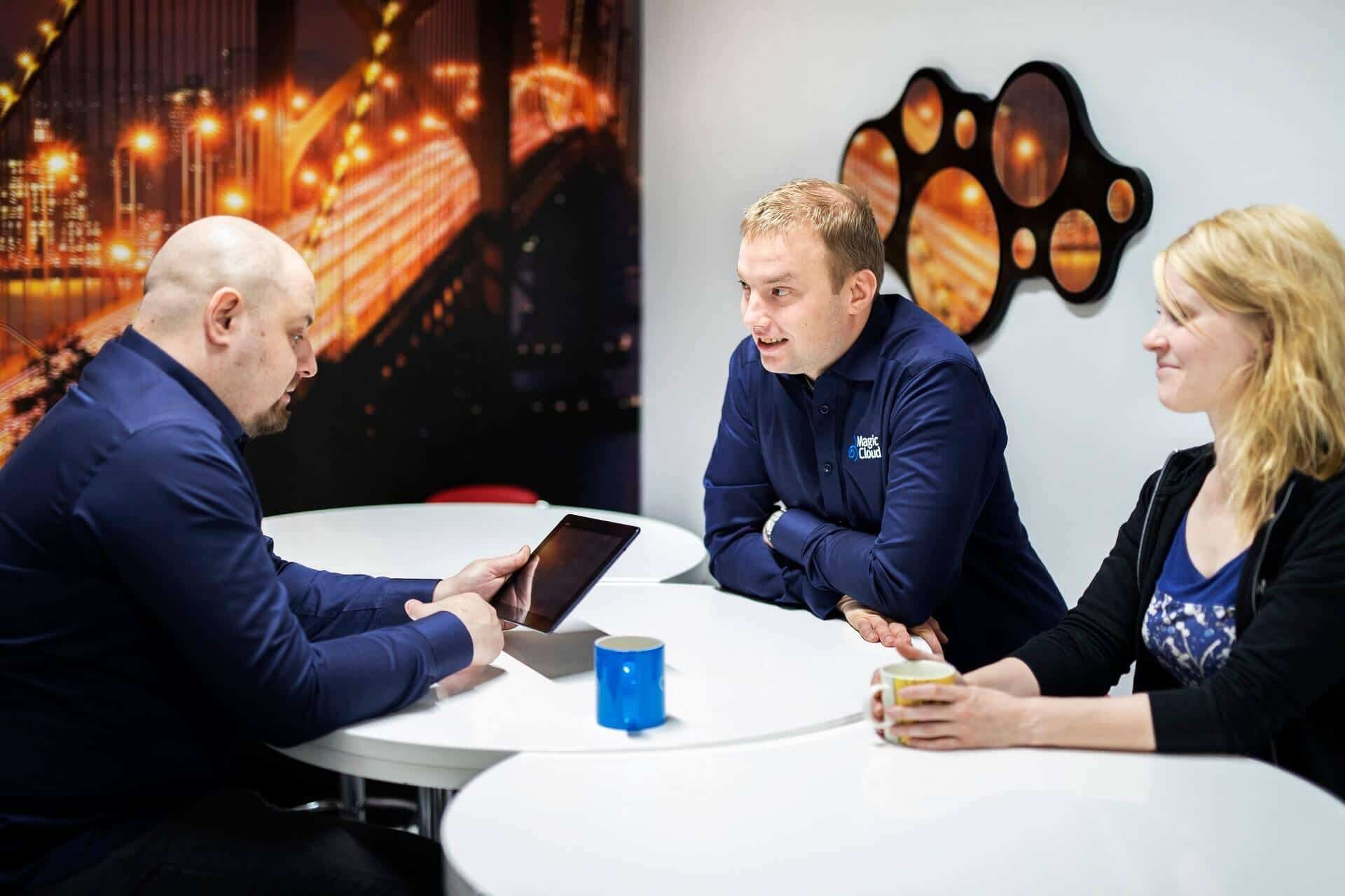 Stores in Ikaalinen and Nummela

The business of a small computer store developed and became larger as Micro Magic moved from the parents’ living room to their accounting company space. Opening hours after school started to feel somewhat boring and childish, which is why Micro Magic decided to hire its first external employee.

– I still remember the day that my dad and I took around thirty computers to my high school and my principal stood there waiting for us. That day it was not the principal who taught me but it was me who advised the principal. Those situations and feelings of success were so remarkable that I will never forget them, Timo says.
In 2000 Timo’s desire to grow and develop the business lead to the expansion of the company to another area. As the business was steadily developing in Ikaalinen, Micro Magic opened another store in Nummela in summer 2000. The young entrepreneur had not even turned 18 yet but he still drove the two hundred kilometers between the two stores with his motorbike.

– People probably thought I was crazy; opening a new store in the metropolitan area while I was still in high school and would soon do my military service must have seem like a crazy idea to a lot of people. Now, almost 20 year later, Micro Magic still serves their clients both in Ikaalinen and in Nummela, Timo tells.

The year 2001 was an essential year for Magic Cloud that was founded ten years later. Timo’s father Raimo Haapavuori, who owned his own accounting company, wanted to digitize his financial management services. Raimo wanted the customers to be able to use the programs of the accounting company over the internet. Micro Magic started to carry out the plan with Citrix techniques, which is how the cooperation with Citrix began. Citrix is still one of Magic Cloud’s most important IT partners today.

At first Timo got help with the cloud technology, but it did not take long until Timo and Micro Magic took charge of the whole technique. In May 2001 the entire digital system was finished and the first customer could start using the system. After that the development of cloud technologies has been rapid and for example internet connections have increased from 128kB to 1GB, which is approximately 10 000 times more.

Besides the business of Micro Magic, the young entrepreneur had to do his military service.

– I remember the numerous work calls during my military service. I would often climb up a tree to talk on the phone and take care of business things. The phones didn’t have any internet connections back then but the company developed anyway even though I spent two hundred nights in the middle of a forest, Timo recalls.
According to Timo the challenges of his military service were nothing compared to his exchange year in Paris.

– The challenges that I’d had earlier with the development of the company felt really easy compared to the time I spent in Paris. I had to study everything in French after having learned it for merely two years before my exchange. The beginning of my studies in France prepared me for the challenges of the future. Today it’s difficult for me to picture situations that would feel as hard as the beginning of my studies in Paris.

The cloud grows and develops

At the end of the decade Micro Magic created a cloud service that today carries the name of MagicDesk. Still today Magic Cloud walks a few steps ahead of its competitors and is the leading provider of virtual desktops in Finland.
In the beginning of the new decade our cloud service business had become an important part of Micro Magic. The store business and the cloud service business of the company differed greatly from each other, which is why the company decided to separate them. This is how Magic Cloud was created in 2012 with Timo and Kimmo Haapavuori, Vesa Sarvala and Matti Rusanen being the owners.

During its 5-year-old history Magic Cloud has doubled both its business and number of employees. In 2016 the company started to plan how CAD-software could be transferred to the cloud and in spring 2017 Magic Cloud carried out the first CAD as a Service-realizations in Finland. During the same spring Magic Cloud started to plan its international business and received a funding for the business model from Tekes.

The CEO sees a lot of potential in the growth and development of the company’s services.

– I think the services have great opportunities to grow and develop even more. In the future I will continue to develop and grow our company: everything runs a bit smoother in a small cloud, and once you’re in a cloud there are no limits for what you can do, Timo says.